It's been a very long time since I last posted anything on here, and I feel like it's about time I got back into it!  The past few years have been pretty crazy for me, so I thought that it might be a good idea to write a few posts about what I've been up to, if for no other reason than as a good reference for me to look back on.

I moved out to Vancouver at the end of August 2013 to chase my dream of working as a professional animator.  I didn't really know many people in the Vancouver, and I didn't actually have a job lined up, but I knew that coming out to Vancouver would probably give me my best shot at getting into the industry.  So with the help of my fabulous parents, I packed up a (very full) van, and headed out on my way. 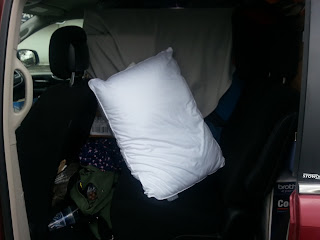 I wasn't able to find a job in animation for the first couple of months I lived in Vancouver, so I worked part time at an arts and crafts store (where I probably spent the majority of my paycheque on art supplies myself, so it's a good thing that I wasn't there for very long...).  I was super fortunate to win an online webinar through Virtual Animators with the super talented Kathy Zielinski, which was a lot of fun and a huge source of inspiration for the short time that it lasted.  I was also going to a bunch of animation career fairs and networking events to try and get my foot in the door at the same time. 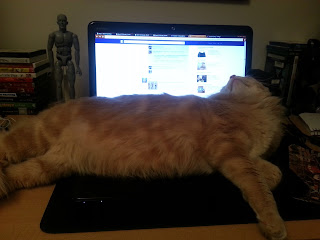 And spending a lot of time with one of my new roommates, Owen.

Around the end of October/beginning of November 2013, after applying to many different studios I finally got an interview at a studio called Nerd Corps Entertainment.  They offered me a position as an Animation PA (or basically a junior animator) working on one of their animated tv shows, and I was incredibly excited to actually get the opportunity to animate for a living.  The switch to a tv production schedule, after having a decent amount of time to work on shots in school was a bit of a shock to my system in the beginning, and I had to put in a lot of work and extra hours to stay on top of everything.  Having to do such a high quantity of animation in a short period of time really pushed me to be better and more efficient, and I got the chance to animate many different things in different shots. Nerd Corps also used Softimage XSI as their animation software, so I had the added challenge of learning a whole new program while trying to figure out how to work on an actual production.  I luckily had an incredibly talented and helpful team of people to work with and get help from, and I learned so much from them in my time there.  Over the course of the 2 years that I was at Nerd Corps (and later DHX Media after the company was acquired) I worked on 3 shows; Endangered Species, Slugterra and Kate and Mim Mim (with a very brief 2 weeks on one of the Monster High Movies).  I'll save the details about them for another post though! 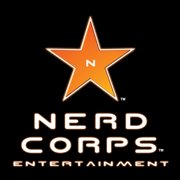 Posted by Erica Miles at 9:43 PM No comments:

It's been a very long time since I last posted anything here, but something pretty cool happened the other day that I feel I should probably write about.

Last Saturday I went to a book signing at the Chapters in the Metrotown Mall in Burnaby for Nick Offerman's new book Gumption: Relighting the Torch of Freedom with America's Gutsiest Troublemakers.  I was incredibly excited because Parks and Recreation is one of my most favorite shows and Nick Offerman's character Ron Swanson is a big reason why I love it so much.

I had seen this video from Conan O'Brian of 'leaked audition tapes' of Nick Offerman and a bunch of other celebrities auditioning for the soon to be Hugh Jackson-less role of Wolverine, and was talking to a friend at work about how Nick Offerman would make an amazing Wolverine, especially if he played it as Ron Swanson playing Wolverine.

My friend mentioned that he should probably be called 'WolveRon' and the name together with the picture in my head was so hilarious that I decided to draw it and give the picture to Nick Offerman at the book signing.

I went to a book signing with Nick Offerman today. I decided to draw him a picture. I think that he liked it. :) #Wolveron #nickofferman
A photo posted by @ericaanim on Jul 18, 2015 at 5:40pm PDT


Also, Indigo Events tweeted a picture of me talking to him which was pretty cool. :)


I had really only hoped that the picture would maybe make him smile or even (if I was really lucky) laugh his fantastic Nick Offerman laugh (which he did), but he seemed to really like it and ended up tweeting it the next day.


That itself was pretty freaking cool, but then I started getting messages from friends saying that the tweet/drawing was showing up on Reddit and Imgur and was getting quite popular.  It showed up on The Huffington Post too!

The response to it has been pretty crazy, and I'm kind of blown away by all of it.  I'm still trying to process the fact that it's been viewed over 1.2 million times and that some people would like to have it tattooed onto their bodies...I definitely didn't expect any of this to happen or for so many people to see it (or I probably would have spent a little more time polishing it up and maybe coloring it...hahaha)

It was awesome just getting to meet Nick, shake his hand, and have him sign my copies of both of his books.  He was incredibly kind and gracious and a super cool person as well.  Also, being able to make someone who has made you laugh countless times laugh at something ridiculous that you made for them is definitely one of the coolest feelings in the world.  :)

Posted by Erica Miles at 2:05 AM No comments:

Guess who has another Threadless design up for scoring... :)  This one is for the Lion King design contest, and I decided to do one of Timon and Pumba.  A more realistic version anyways.  You can find it here.  If you have a moment to score it (preferably a 5) I would super appreciate it!!!

I originally wanted to do the whole cast, but I was only able to get Timon and Pumba done before the contest deadline.  I did a Simba and Nala after I submitted it too.

Also, I have a TON of new stuff to post about, which I should hopefully get to over the next week or so!
Posted by Erica Miles at 6:01 PM No comments:

It's been so long since I last posted something!  I still have a bunch of AM stuff to throw up here, but first I have another Threadless design contest submission!  This one is for the Thor contest.  My love of terrible puns definitely played a hand in this one.  I called it '5 Day Forecast' and realized afterwards that I could have taken it a step even farther by calling it '5 Day Thorcast'.  Oh well.  It's still up for scoring, so I would very much appreciate it if you could (hopefully) give it a 5 for me.  I also love comments and facebook likes/etc.  Thanks in advance!!!!!!  You can find it here!

Posted by Erica Miles at 9:46 PM No comments:

Aaaaaaaaaaand another Threadless design contest submission!  This one for the Spongebob challenge.  You can find it here.

Voting is open for 1 more day!  It has been doing decently well so far, but every vote counts!  If anyone else sees this in time to rate my design (preferably a 5) it would would make me a very happy camper.  Thanks!
Posted by Erica Miles at 10:58 PM No comments:

I submitted a design to the Threadless 'Odd Couple' design challenge, and here it is!  I had to make sure that the title was sufficiently pun-y, so I called it A Match (Mer)maid in Heaven.

I would be super appreciative if y'all could rate it (a 5 would be preferable) to help it get picked and printed!  If you want to like/comment on it as well it would be lovely!  I believe that voting is open for 6 more days.  You can find it here.  Thanks!
Posted by Erica Miles at 9:27 PM No comments:

I've been a Busy McBusy-son lately, animating up a storm.  As well as my Animals and Creatures 2 class (which I will try to remember to post about soon...) I've been working on some new dialogue tests.  One of my classmates from last term, who is a super awesome animation supervisor at Nerdcorps in Vancouver gave me some great advice about tailoring my demo reel to studios.  I asked him about applying to Nerdcorps which does a lot of work for television, and he suggested that I try animating 3 different dialogue pieces in 3 days-1 day for each shot.

I chose a fairly short clip for the first one, as it has been a while since I last animated a dialogue shot.  It turned out ok, I ended up spending a good portion of the day trying to figure out how the handcuffs were going to work though...

questions from Erica Miles on Vimeo.

For the second one I picked a longer clip, with two characters.  This one took me a bit longer because of the two characters, one of which being a dog (and a rig I had not used before as well).  This one could still use some work (and I haven't had a chance to upload it yet).

For my third shot I picked an audio clip that I've been wanting to animate for a while.  I think that this one turned out the best of the three.

Quarter from Erica Miles on Vimeo.

I've definitely noticed myself getting faster working on these shots and I'm going to work on a couple more over the next little while.
Posted by Erica Miles at 1:00 PM No comments: